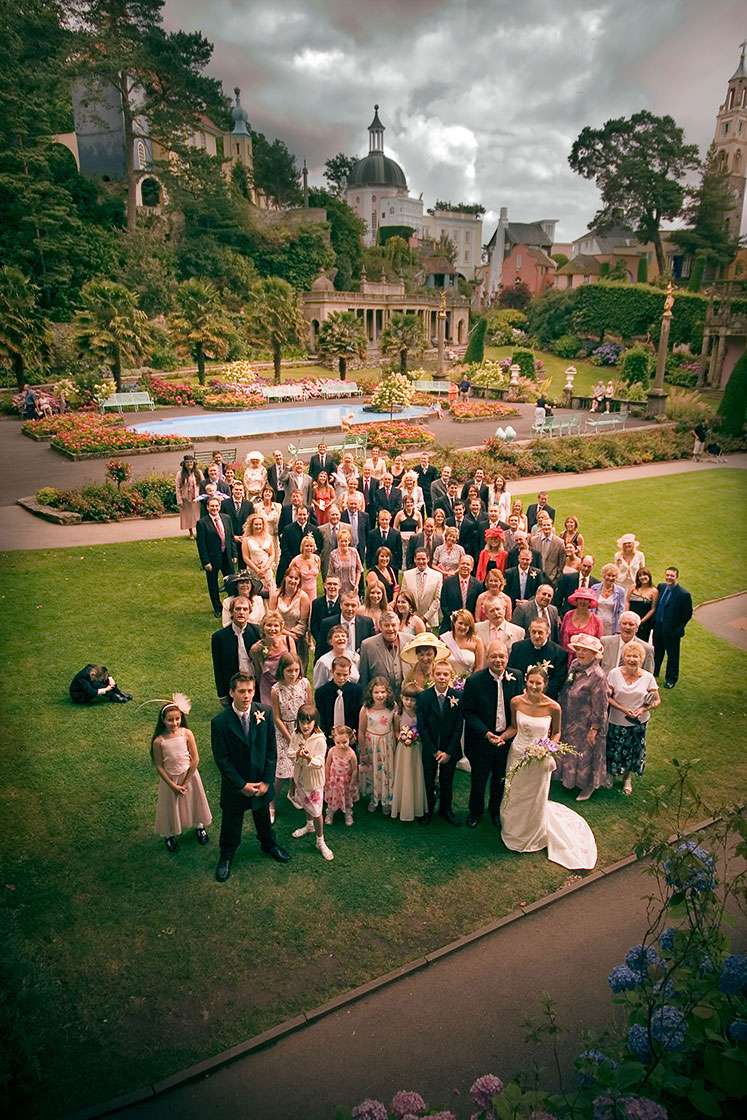 After a nice, but uneventful engagement shoot at Laura and Andrew’s lovely modern Colwyn Bay home, I was not expecting such a day full of surprises for the wedding day. They had asked me to cover the whole day from the Bride’s preparations to fireworks in the evening.

The first event to test my journalistic reaction time was revealed to me with literally two seconds’ notice in the Bride’s hotel room when I was told that droning sound we could hear was coming from a 2nd World War Spitfire flying specially over, piloted by the Chief Bridesmaid’s father on his way to an air show.

Everything else was pretty normal and predictable through the ceremony and the wedding party made its way outside onto the terrace overlooking Portmeirion's Glaslyn Estuary. I did my usual job, catching reactions of guests congratulating the couple, and generally having fun on a fine summer’s day when I became aware of a focus of interest in the direction of the water. The Bride rolled her eyes as if to say, “Typical, here we go again” and I realised why suddenly cameras were raised and pointed the same way. I got the cue to attach my longest lens to capture the next big surprise of the day as the groom and one of his ushers (not the Best Man!) could be seen heading towards the sliver of water in the distance completely naked. Next was a big splash as Andrew's mate dived into the water. Apparently, Andrew has a liking for such eccentric activities. I managed to document their return, unbelievably unnoticed by innocent bystanders enjoying the picturesque Italianate village of Portmeirion. This is just the sort of thing which has to be caught when shooting a wedding in reportage style, and thankfully it has made the album and will be a tale to tell their grandchildren.

Unfortunately, our plans to take shots of the Bride and Groom had to be abandoned when Andrew’s feet were revealed, covered in black river bed mud all the way to above his ankles.

My next surprise was a pleasant one when, in a quiet moment wandering through the lovely village, I came across Laura and Andrew by chance, Andrew all spruced up again now wearing black and white chequerboard patent leather shoes. We were then able to go back to plan A, and get some nice images of the two of them alone.

Later on, I was treated to an acrobatic performance with Andrew and another of his mates joining together head to toe to make a human cartwheel rolling across the floor.

The final surprise came when it was suggested that a certain relative of the groom would treat me to a flash of her boobs if I asked her. Even I was shocked by the notion, but I said that I would capture the image, but only if her girl friend would ask her. She encouraged her by saying, “I will if you will”, then after a countdown, I was treated to the final double revelation.

The shoot was the longest coverage I do, being an exhausting fourteen hours. There were so many images the couple liked that they ordered a two volume album with the maximum number of pages possible, as well as mini albums to send to their family and friends.

I am so grateful to Laura and Andrew for inviting me along to share their truly memorable and surprising wedding.

You’re right, it was a fantastic day and everyone really enjoyed themselves. The whole gang keep going on the web to try and find the pictures and were really impressed by you. We fly tomorrow morning and return on the 28th August hopefully with some great pictures of my own. Thanks a million for all your hard work and best wishes